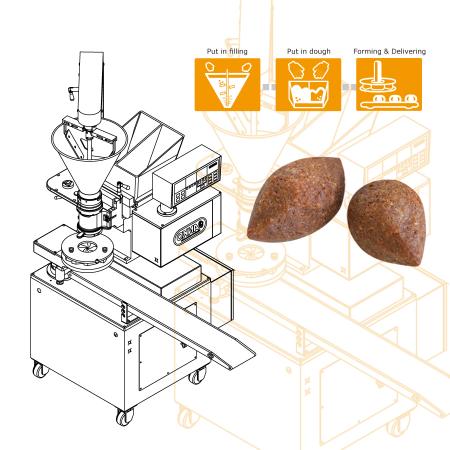 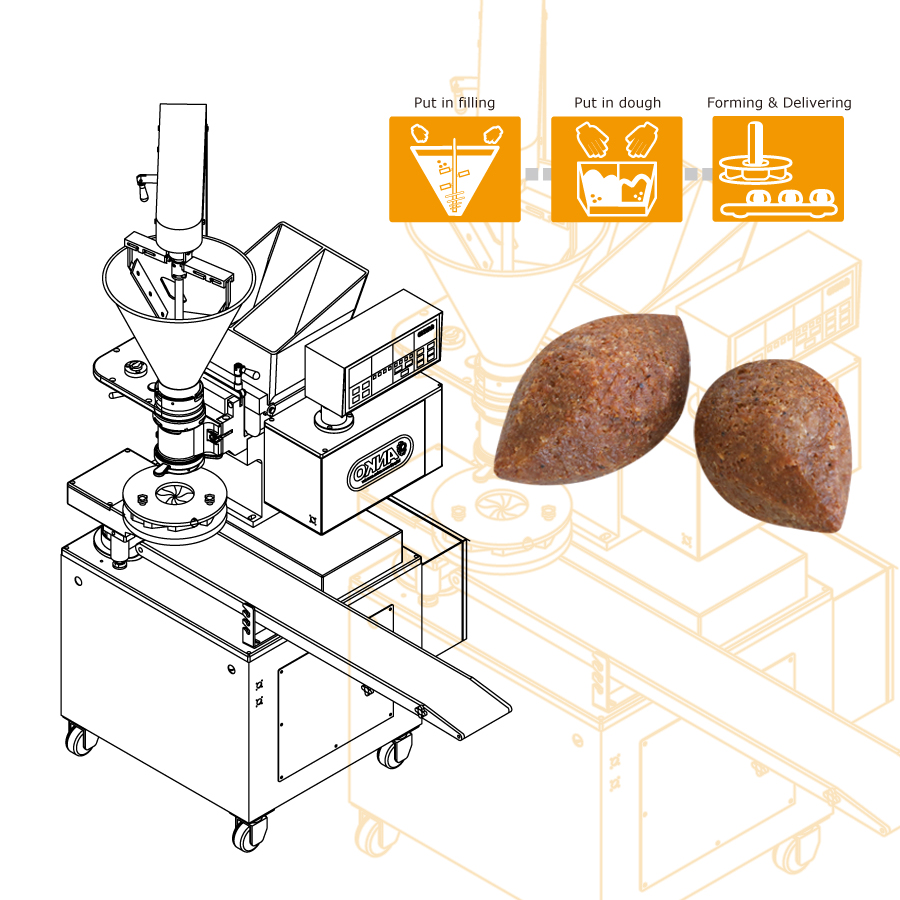 The company provides frozen food for numerous hotels and villages in Cairo, Egypt. Consumers can also buy their products online, in supermarkets or deli. Selling products in multi sales channel had leaded to an increasing demand, so the company's owner, via a dealer, had been looking for a supplier who can offer an automated production solution for making kubba. It's always a challenge to make a machine work well with a new recipe. In this case, we had a problem in forming kubba because the crust was too sticky. The just formed kubba would stick to the shutter unit and then be broken while the shutter unit opened. Through recipe and temperature adjustment, ANKO team solved the problem successfully.

Kubba is derived from the Classic Arabic word "kubbah", meaning "ball". The egg-like food is made with fine bulgur wheat, chopped onions, ground meat, and Middle Eastern spices. Kubba is a popular dish in the Middle East; however, there are many variations in different countries, such as kubba with tomato soup, kubba with cream & cheese, and rice- or potato-made kubba. Every mom has her own homemade kubba with secret ingredients that many travelers miss the most.

(1) Soak fine bulgur in water for 10 minutes and drain off. (2) Chop the onion. (3) Put the chopped onion, ground lamb, allspice, coriander, black pepper, and salt in a food processor. Process them into soft paste. (4) Put the mixture in a bowl and cover with cling film. Then, refrigerate it.

(1) Heat oil in a frying pan. (2) Add the chopped onion, ground lamb in the frying pan and fry until brown. (3) Season with ground allspice, cinnamon, black pepper, and a pinch of salt. Stir well to combine. (4) Set aside to cool and add in pine nuts.

(1) Take the crust mixture out from the fridge. (2) Dampen hands before forming kubba. (3) Take some paste and roughly shape it into a ball. (4) Make a hole in the middle. (5) Scoop some filling and fill in the hole. (6) Seal the top and shape it into a spindle-shaped kubba. 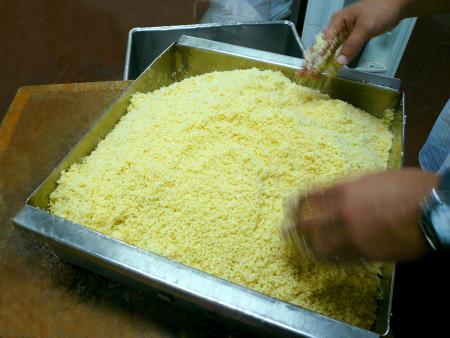 The video shows how kubba is made by hand. First, take the crust mixture and make it into a cone shape. Spoon onion and ground meat filling into the crust. Then, seal and shape the kubba.

How to solve the problem that kubba cannot be shaped by the shutter unit due to the sticky kubba crust mixture?

Generally, fine bulgur and ground meat cause stickiness. Although ANKO team had done more than five kinds of kubba with the machine, the machine could not work well with the Egyptian client's recipe. It is because the kubba mixture is too sticky. To solve the problem, reducing water content is a simple solution, but it might spoil the original taste. Therefore, the way to prevent stickiness without modifying the recipe was to ...→To get more information? Please Click Contact Us Below 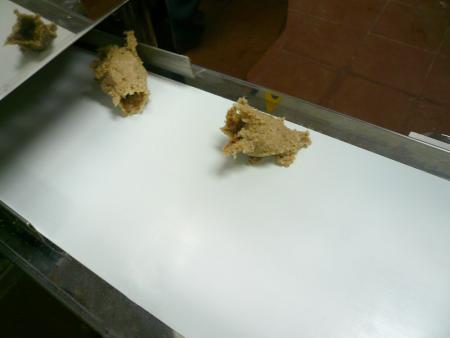 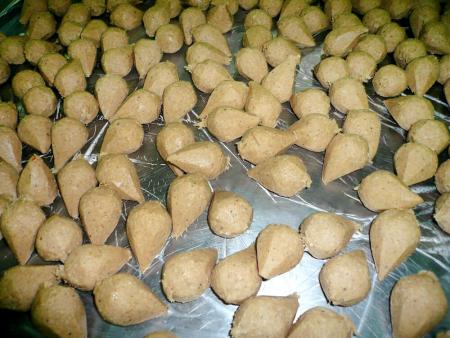 After adjusting, the crusts of kubba are smooth and not sticky.
CONTACT US

Why the shutters of some encrusting and forming machines cannot form products?

There are a lot of encrusting and forming machines in the market. They may look the same but are uneven in quality. We often heard people said that their shutter couldn't form products efficiently, that is, final products still connect with each other. Even though all machine parts are made as same as ANKO's machine, they cannot figure out those problems. The secret is the speed of shutter opening and closing as well as the design of its material and action. 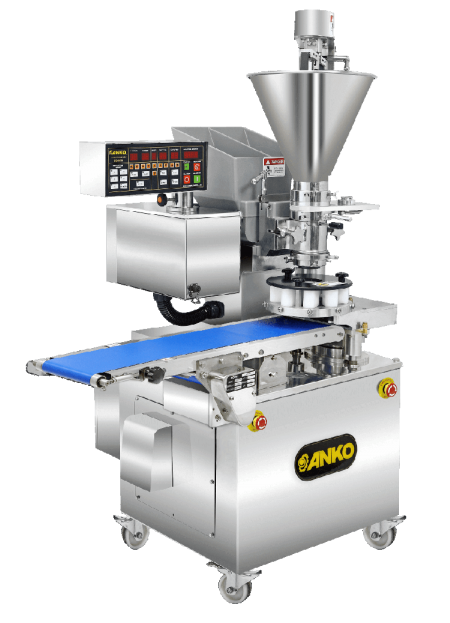 SD-97W is a multi-purpose automatic encrusting and forming machine that is especially designed to make products with fluffy stuffing inside and lightly crispy crust outside.

With two hoppers for two kinds of dough, it is capable of making stuffed product with two color wrapper. Five often-used patterns can be saved in the machine's memory to remember the settings including dough and stuffing extruding amount, shutter speed and conveyor speed for easy production.

Automatic Encrusting and Forming Machine can make either patterned or non-patterned products with a simply change of shutters; it can also make either two color or one color products. Not only the products with red bean paste, meat stuffing, or sesame paste but also plain products are producible. In conclusion, SD-97W can make dozens of ethnic foods such as meat bun, steamed bun, kubba, maamoul, meat pie, pan fried stuffed bun, mochi, crystal dumpling, etc. Their look and taste are able to compare with handmade ones. 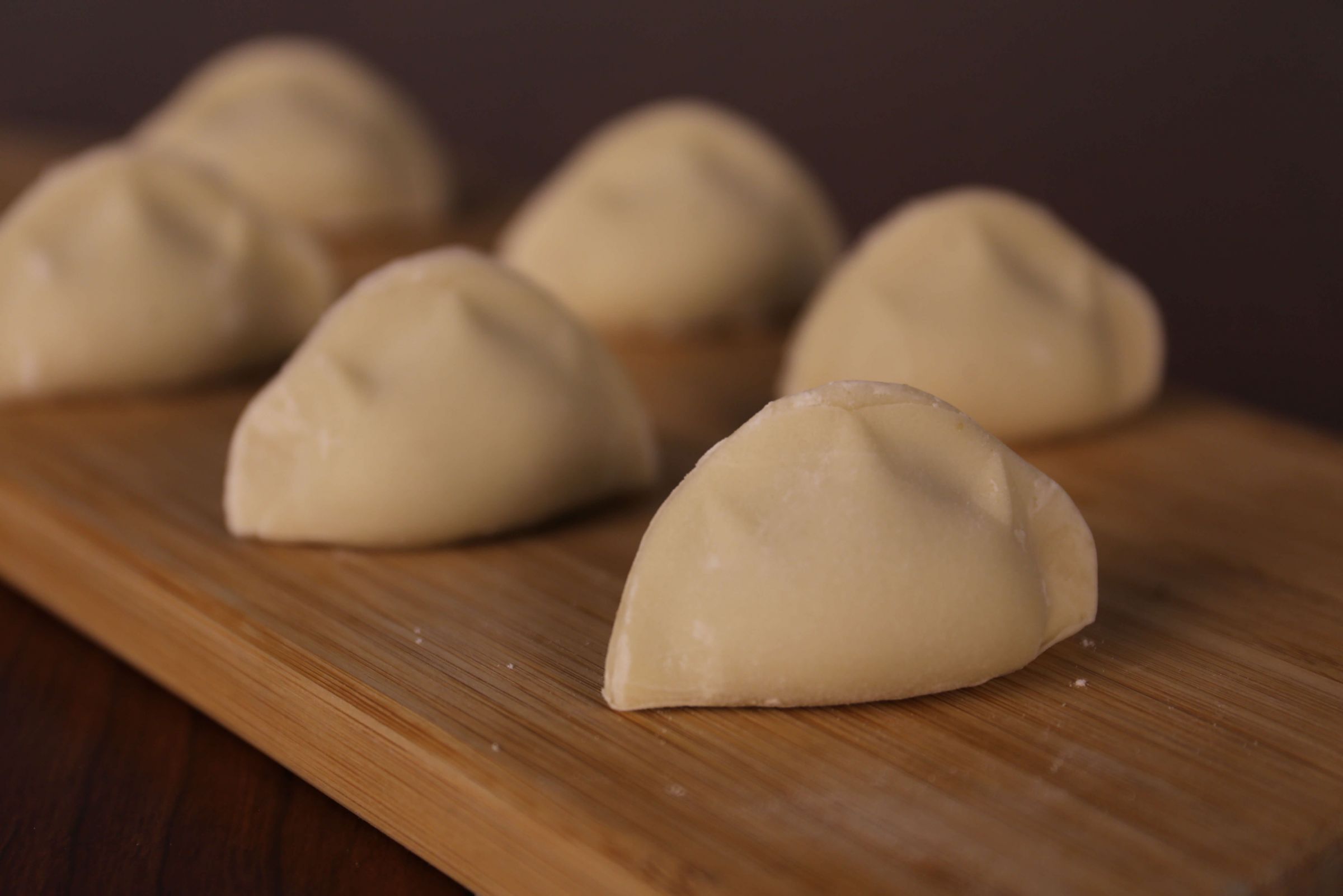 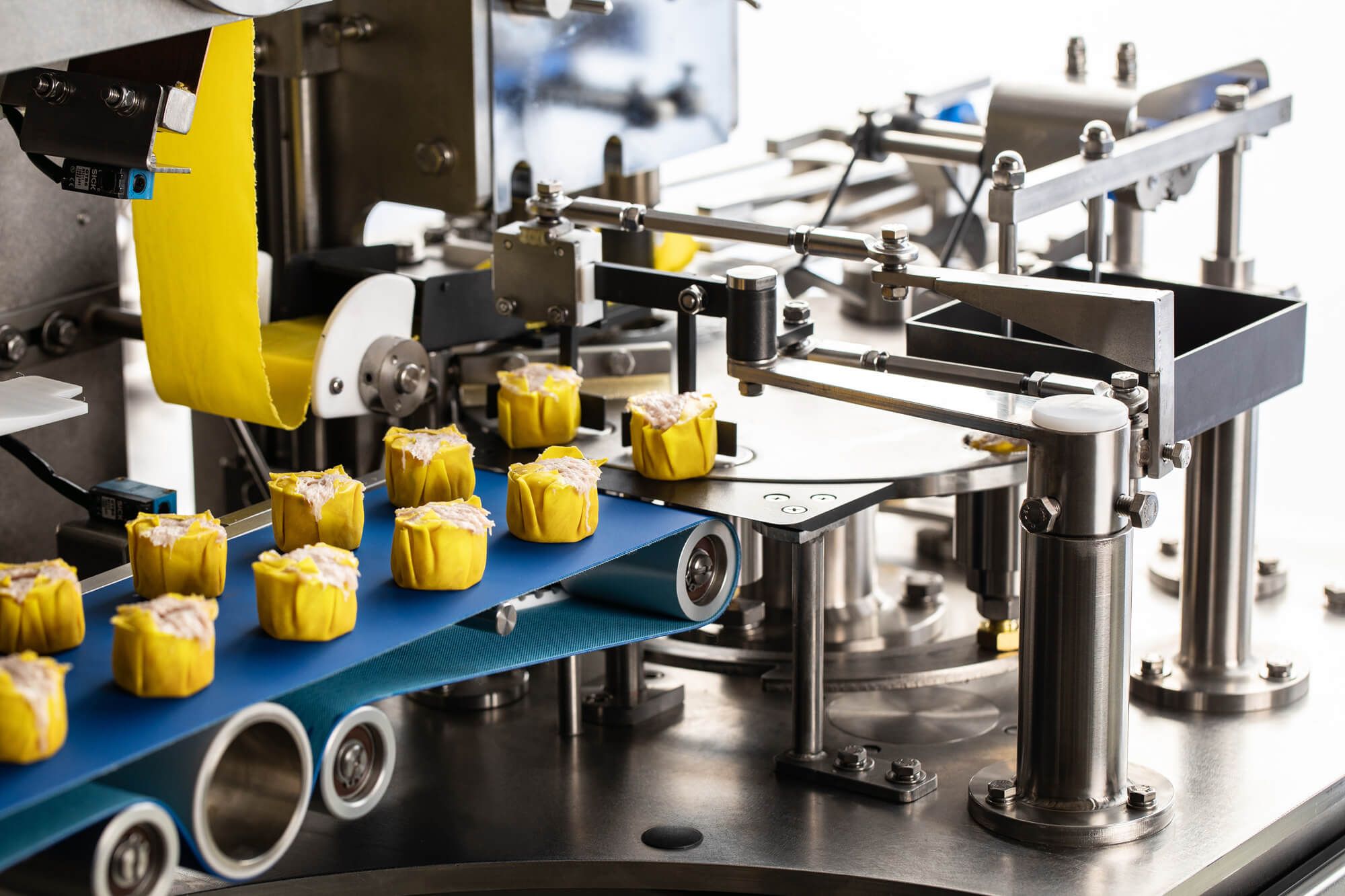 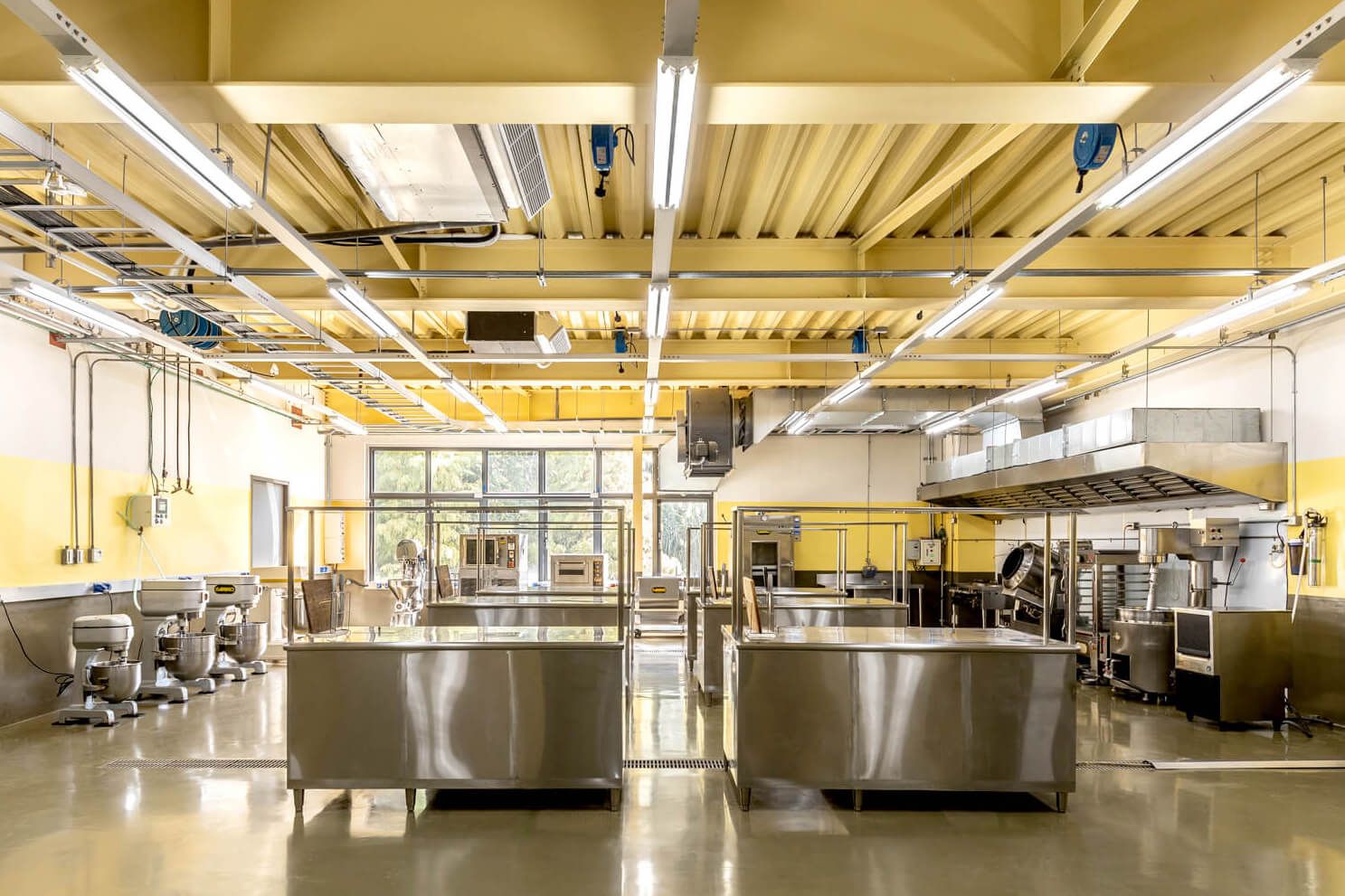